the long-anticipated release of my duo album with Chris Cochrane, “Geologic Time”, on Infrequent Seams, the proprietor of which, James Ilgenfritz, shall be joining us as part of the Hypercolor trio! It’s at THE GLOVE which is an awesome speakeasy showspace. Hope you can join us!

“The music is a delight, the continuity of the work lending an aether of enquiry, of investigation through shifting structures, liquid dissension and aggressive, conflicting textures … Overall I was reminded of Ornette Coleman as both composer and player … There is a very open feel about the album and each musician’s distinctive, transparent sound is bell-like in its clarity and this in turn distinguishes their contributions to the collective æsthetic. Five very fine musicians present an hour of exquisitely accomplished music.”

Brad Cohan has been providing super-intrepid and thoughtful reportage of the new/creative music scene here in NYC, and wrote the following about this week’s shows!

Last month, the Observer highlighted The 15 Best Metal Bands in NYC with sludge-metal crushers Bassoon leading the way. Not only will you get your chance to see Bassoon inflict its Melvins’y damage on May 2 at Gold Sounds, but the night before protean bassist/composer Stuart Popejoy shows off his avant-jazz chops as he joins forces with guitarist Brandon Seabrook and Talibam! drummer Kevin Shea for free-improv fireworks at Gowanus’ jazz hub, ShapeShifter Lab.

Don’t fret if you miss those gigs because come May 7, Popejoy, alongside an avant all-star group that includes violinist Sarah Bernstein, alto saxist Avram Fefer, trombonist Steve Swell and drummer/vibesman Kenny Wollesen, celebrates the release of the sprawling Pleonid.

A single, hour-long composition birthed from software Popejoy himself developed and broken up in seven-minute intervals, Pleonid’s mesmerizing angularity, dizzying patterns and conversational back and forth is both cathartic and intense.

The big one! With Kid Millions, Ava Mendoza on the bill.

“Popejoy points himself towards counterpoint via improvisation and customised software that he has designed making use of braid theory in doing the maths. There’s a real collective heat and sense of exploration that actually gets somewhere throughout this hour-long continuous work … [A] sparkling listen that unfolds into an Ornettian omniverse. Just be good to yourself and go listen!” — Marlbank jazz www.marlbank.net/even-more-dream-weaving/3822-hour-power.html

AVA MENDOZA (b.1983) is a Brooklyn-based guitarist, vocalist, composer and songwriter. Since 2002 she has been active playing er own music and in many different groups. In any context she endeavors to bring expressivity, energy and a wide sonic range to the music. Mendoza has toured throughout the U.S. and Europe and recorded or performed with a broad spectrum of musicians including singer Carla Bozulich (The Geraldine Fibbers, Evangelista), Fred Frith (Massacre, Henry Cow, Art Bears), Jon Irabagon, Mick Barr, Nels Cline, Jamaaladeen Tacuma, Weasel Walter and more. Her recordings are available on labels Tzadik, Weird Forest, Clean Feed, NotTwo, Unrock, ugEXPLODE, Resipiscent, New Atlantis, and more.

Friendly critics have called her an “avant-jazz virtuoso” (Brad Cohan, Village Voice), “a wizard on a semi-circle of effects pedals, but… equally adept with FX-less technique,” (Lars Gotrich, NPR). In 2011 she was featured as one of Guitar World‘s “10 Female Guitarists You Should Know”.

Gotten some nice coverage so far, two in European magazines/blog and Bruce wrote a nice review in DMG!
DMG: 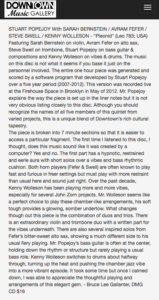 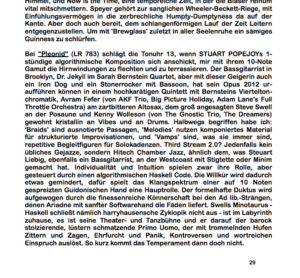 This live recording of the 2012 performance of my piece “Pleonid” is out on Leo Records! The band of Avram Fefer on alto sax, Sarah Bernstein on violin, Steve Swell on trombone, Stuart Popejoy on electric bass, and Kenny Wollesen on vibraphone and drums, did an amazing performance of my 60 minute piece which can now be yours in all of its jewel-case retro charm!